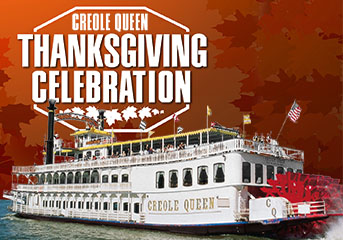 Relax this Thanksgiving by taking the family to the Paddlewheeler Creole Queen's Thanksgiving Celebration on the Mississippi River, this year with two tour times available.

Sites to See From the Creole Queen

Not only is the experience of being on the Paddlewheeler Creole Queen for a daytime Chalmette Battlefield or nighttime dinner jazz cruise one of a kind, but so is taking in all of the landmarks and attractions that can be seen passing by. Here are the top sites along the Mississippi River route that can be seen in different lights on each cruise. New Orleans has no shortage of fascinating, historic structures, and some of the best can be seen from right aboard the Creole Queen.

French Quarter – The Creole Queen cruises start parallel to one end of the French Quarter and sail through to another. Passengers can get a sweeping view of the famous New Orleans neighborhood closest to the river at a leisurely pace in just a few moments. The French Quarter is indeed beautiful close-up, but there’s something mesmerizing about admiring it from the Mississippi.

St. Louis Cathedral – Part of what you’ll see passing the French Quarter on the Creole Queen is the iconic St. Louis Cathedral overlooking Jackson Square. It’s one of the most emblematic, picture worthy images of New Orleans and one you won’t want to miss!

Other vessels – The Port of New Orleans is the busiest waterway in the world and welcomes incoming and outgoing commercial shipping and Navy vessels every day. Passengers will no doubt see several other boats and ships while on the Creole Queen carrying a variety of different cargo.

Holy Cross – After passing the French Quarter, Marigny and Bywater, some interesting sites can be seen in the Holy Cross neighborhood of New Orleans, a sub district of the Lower Ninth Ward. Perhaps the  most interesting are the Doullut family “Steamboat Houses” which were built in the early 20th Century to resemble Mississippi River steamboats.

Industrial Canal – Technically the Inner Harbor Navigation Canal, the more casually called Industrial Canal opened in 1923 after dredging began in 1918. The canal connects the Mississippi River to Lake Pontchartrain and runs through the Ninth Ward, separating the Upper Ninth Ward from the Lower Ninth Ward.