For the safety of our employees and visitors, New Orleans Paddlewheels welcomes the new City of New Orleans COVID-19 mandate of identifying proof of your COVID vaccination or a negative COVID-19 test in order to receive boarding passes for our riverboat cruises. Please click here for our comprehensive Covid Guidelines.

Comprehensive COVID-19 Guidelines
Beginning August 23, 2021, For the safety of our employees and visitors, New Orleans Paddlewheels welcomes the new City of New Orleans COVID-19 mandate of identifying proof of your COVID vaccination or a negative COVID-19 test in order to r…

Continuing our series on the Creole Queen’s Historical Cruise guides, this week we present Christopher Tidmore, an experienced historian, political journalist and world traveler. Discover what he loves about the Historical cruise, New Orleans, and his deep-rooted personal connection to the Battle of New Orleans.

Creole Queen: Describe your role as historical guide on the Creole Queen.

Christopher: In a manner of speaking, what we do here is a walking tour on the water, going forth and describing the weird and wonderfulness of New Orleans and along the way, the Battle of New Orleans itself. I find myself describing my passion which is this city, every day to thousands of people who come on this boat and open their perspective on not just the battle but how essential New Orleans is in the history of the American world, from the U.S.’s manifest destiny coming through the river to ultimately the indigenous form of American music – jazz – coming about, to things as basic as the cocktail and the second line. 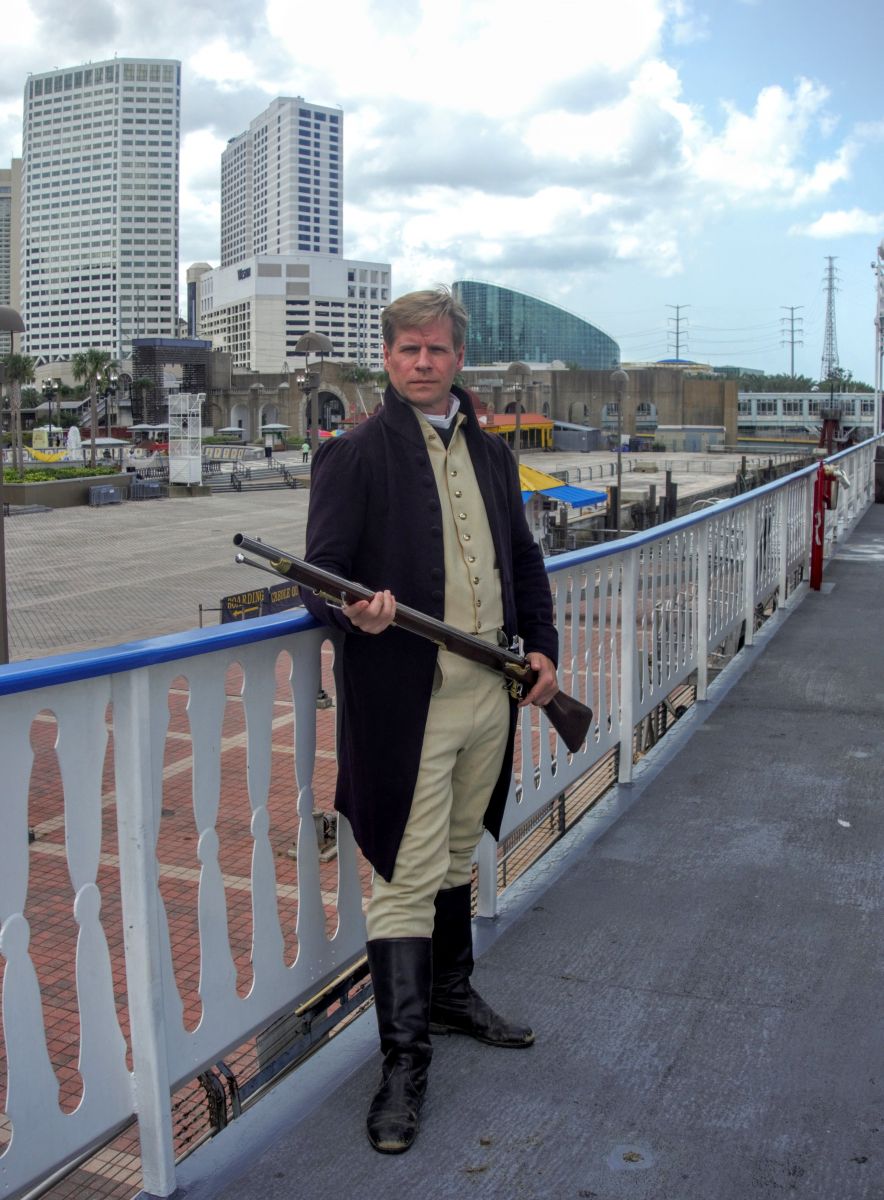 Do you have a favorite story or piece of history from the cruise?

I love to tell the story of the development of Mardi Gras, particularly about the Grand Duke Alexei Alexandrovich Romanov – the visit of a Russian Grand Duke in the 19th Century and how it explains so much about New Orleans. Essentially  New Orleans is the only place in the Western world that has an actual absolute monarch we get one day a year. But that story sometimes pales before the reason why I do this tour in general on a very personal level.

What’s your favorite part of being a Historical Cruise guide on the Creole Queen?

The most important part is telling the story of the battle, but there is a personal connection to it. Jacques Philippe Villere was the head of the militia at the Battle of New Orleans when the British seized his plantation – and his younger son is my great-great-great-great grandfather. His father lead the revolution of 1768 which is why he had to flea at the age of 14, leading a vagabond existence but learning why he had the military skills to be able to ask President Madison to send support because the British were coming when no one believed it. He becomes the first native governor of Louisiana and that legacy gets to be something I get to talk about. But the personal connection which I mention at the end, is essentially he has a son who serves in the Civil War, who has a son who is a pharmacist, who has a son who is a very prominent attorney involved in politics, who has a son who is a federal judge and a daughter who is an artist who has me. The Chalmette Battlefield is my family’s plantation – the eastern part where the cemetery is.

The only way to really understand the Battle of New Orleans is to approach it by the river because otherwise you don’t get the perspective of how close it is, you don’t understand the West Bank. While visiting the park is an essential part of the visit, being on the Creole Queen is just as essential, if not even more essential to get a feeling of how the battle went.

What brings you back to New Orleans?

I’ve been to 51 countries in the last 14 years. It’s not the blood in my mud that brings me back here. It’s the fact that there’s no place on earth quite like New Orleans. I’ve written a million words in my career and I’ve come up with one original thought – New Orleans is a failure at everything but living, but God do we know how to live.

What’s your background in history and tourism?

I’m a former student and assistant to Dr. Stephen Ambrose, the founder of the National WWII Museum. I’m also the Communications Director and Board Member of the Louisiana Living History Foundation, of which Hospitality Enterprises and the Creole Queen is a major supporter of – including the yearly reenactment of the Battle of New Orleans. Last year, I narrated the event which included over 1500 reenactors from seven continents and helped raise over $200,000. On a more direct level, I’ve been a political journalist for over 20 years and have served as a senior advisor to two U.S. Senatorial campaigns. Currently, I’m the Political Editor of Louisiana Weekly and I host a national radio talk show, the Founders Show on WRNO 99.5 FM.

What do you love about New Orleans?

People do not come to New Orleans to hear some dry history on a boat. What they come for fundamentally is the joie de vivre of being here. Laissez le bon temps rouler. What we do on the Creole Queen is explain where that comes from. More than anything else, we explain that this was a population that had to find joy and create an appreciation of life at every moment, because death was a great constant. If fire, flood or hurricane didn’t get you, disease would. We fought both nature and man to create signature American artforms. What is original about America was born here in New Orleans.

Why do you think visitors should experience the Historical Cruise on the Creole Queen?

Because there’s no other place where you can get all the different elements of the New Orleans experience in one place. You’re not only getting food and music, you get history and the river and geography and perspective. There’s something magical about passing Jackson Square and seeing that iconic view. Hearing the history at that perspective – the geographic perspective – with a drink and with music, that matches nothing else and matches everything else. It’s as if we decided that you can simultaneously put the Cabildo museum in the middle of Preservation Hall wrapped up with the Carousel Bar at the Monteleone and accentuated by John Besh.

Enjoy Christopher’s captivating commentary on the Creole Queen Historical Cruise, and look for him at the next anniversary of the Battle of New Orleans where he will serve as the narrator and master of ceremonies on January 8-9, 2016. Tune in to his radio program, the Founders Show on Sundays from 8-9 a.m. on WRNO 99.5 FM, which reruns on WSLA 1560 AM on Mondays, Wednesdays and Fridays from 8-9 a.m.